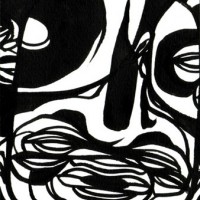 Born in 1971 in Milan, where he currently lives and works.
In 1990 he moved to London with some intervals in New York, and resided abroad until the new millennium.
In London he studied at  Central Saint Martins and he graduated in Graphic and Media Design at London College of Communication;  in New York Bo130 had his first work experience.
In 1985 he entered the world of graffiti  and for the last 12 years he devoted himself entirely to his artistic development, consolidating valuable experiences with galleries and museums around the world.