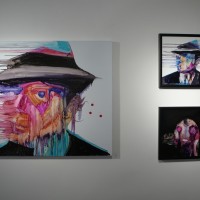 Jacopo Ceccarelli aka 2501 was born in Milan in 1981.
He started to paint at the young age of 14 and never gave up working on the walls of his own city, Milan. First with the Tag of Robot Inc (with this name he was published on the Tristan Manco’s book “Street Logo”/ Thems and Hudson) and then as 2501 he started a new style that put together wall painting, paint on canvas, sculpture's and video.

He moved to Sao Paolo at the age of 20 where he got in contact with all of the South American graffiti school (Os Gemeos, Herbert Baglione, Higraff, Zezao etc. etc...) changing his approach to painting completely.
Back in Milan, between 2004 and 2007 he was member of llloolll studio, mainly working with web-design, motion graphic, and much more. He also studied film editing at the “Civica Scuola di Cinema” in Milan.
In 2007 he moved for the 2nd time to Sao Paolo and started to focus just on his artistic career .
He joined various exhibitions and books about street art such as :''Art of rebellion 3" , Dunk Windows (nike IT),"The Urban Edge show" (Milan) , "Urban Affair" (Berlin).