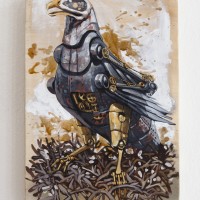 Born in Turin in 1984, Pixel Pancho was introduced to color and form by his grandfather who painted occasionally. With time, his passion for art and design led him to the Albertina Academy of Fine Arts followed by the Academy of Fine Arts in Valencia, Spain where he obtained his degree. During this time he became familiar with the graffiti and street art scenes. Influenced by this world, he began using spray cans and marker and working on outdoor surfaces which stood out from the classic paper and canvas formula of other students. Traveling between his hometown of Turin and Valencia Pixel Pancho took every opportunity to be noticed on the streets, using different mediums such as tiles, wall painting and sticker/poster art. Pretty soon his work was adorning the walls of many European cities. Pixel Pancho’s work draws from several diverse influences. Traces of historic painter Joaquin Sorolla, the surrealist Salvador Dali, the political painter group “El Equipo Cronica” to the more modern Ron English, and Takashi Murakami can be seen in his work. Traveling to Paris, Amsterdam, Warsaw, Vienna and many other cities for graffiti jams and gallery exhibitions has allowed his style to evolve from a simple robot character to the more complex compositions in his work today.
The narrative in Pixel Pancho’s work is driven by a forgotten world that sits under a blanket of dust. In it, broken and dented robots are found decaying into the ground, their iron and rusted copper bodies falling and laying as if discarded into oblivion. Although the scale of his work ranges, the surreal realm is a constant thread, piercing through contemporary and historical references that add a sense relevance within our place and time. The strength of physical and gestural references that humanize these robots results in the artist's unmistakable mark. Found on the walls of abandoned buildings in cities throughout Europe, the U.S. and Mexico, Pixel Pancho’s work is an interconnected structure of stories. The murals, the paintings, the sculptures....in the end are only a small part of something greater, another story within the ever growing realm.

The Garden of Eden