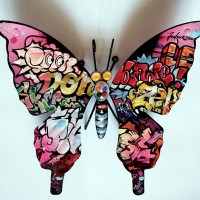 Mr. Wany born in Brindisi in 1978 and residing since more than 10 years in Milan paints with the attitude of the illegal act and often in freestyle to preserve the freshness of his markings, also known as the swing and the flow of lettering that he combines with his characters. He manipulates the structure of the composition to obtain an aesthetic cohesive solution. He uses extreme wildstyle letters, influenced by 3D techniques, one of the most advanced ways to bend and stretch the structure of the letters, an essential element in the culture of style writing with an engaging high visual impact. His collaborations included set design, screen printing, music producing, professional dancing and self-produced publishing with Ill Fame – founded in 1996, one of the first fanzines on writing and hip-hop culture. While acting as a testimonial and opinion leader, he produces artworks for various brands, Posca, Ironlak, Red Bull, Casio G Shock, Nike, Adidas to name a few.