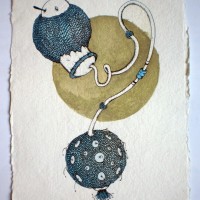 Microbo paintings and drawings, are a science-fictional microcosm, made up of filaments, seaweed, humus and living creatures which recall life’s complexity, synthesized in a microbe, the first living being appeared on Earth.
Like any music form rises from a merging of only seven notes, so Microbo’s creative process develops through the combination of some basic elements she likes to play with.
Creatures of different shapes which seem to float within a kind of amniotic liquid in which everything is still taking its shape. A liquid feeding it’s inhabitants in absolute gravity absence prompting the image of lightness which represents the best part of existence.

"Microbes constitute the essence of all forms of physical life”, says the Artist. Without them, life would not be possible, and with the progress of Science, microbe is still the original form of life, the more varied and of which we don’t know so much.
Starting from the beginning, Microbo recognizing the limits of our cultural myths, she seems confident that the exploration of small bodies may provide to give us the key to alter our perception of the universe and to understand the role that humanity plays in it.” (from Microbo: Under the Microscope A review of Microbo’s work by Harlan Levey - Editor in Chief, Modart Magazine.)

Recognized for her sensitive visual language, Microbo’s original aesthetic universe has risen her to a role where she is perceived as an early and influential member of today’s so called Street Art movement.
Micorbo’s works are part of private and public collections in Europe, USA and Lebanon.
and have been also documented in numerous publications and international magazines.
Born and raised in Sicily (Catania, 1970). Microbo spent the '90s in London, at the moment she lives and works in Milan, Italy.