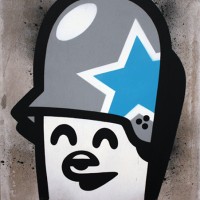 Flying Fortress has left his mark all over the world and has collaborated with some of the biggest names in street art and graffiti. His icon the “Teddy Trooper” has been sold out time after time and as an artist he is always coming up with new ideas and variations to keep his fans always wanting more.
Munich based artist Flying Förtress started to do classic graffiti in the early 90’s. After a couple of years he felt himself stuck in a one-way alley so he quit writing and focused on his graphic studies. Back with new ideas and influences he arose again at the beginning of the millennium and hit the streets back with his infamous Teddy Troops. First they appeared on posters, stickers and as pieces on the walls but later also turned into the third dimension as an urban vinyl toy. The Troops are still getting sent out to occupy the public and private space. He has been traveling around the world for exhibitions to places like Paris, Barcelona, London, Berlin, Los Angeles, New York, Tokyo, Melbourne and New Zealand.