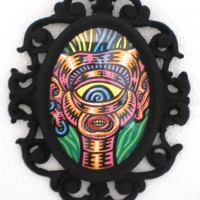 Gianluca Lerici entered the punk movement during his years in the military as a musician and designer for underground fanzines during his years as a student at the Art College in Carrara, among other things creating flyers for concerts and graphics punkzines. He continued his studies at the Academy of Fine Arts where he followed courses in painting and sculpture and then graduated in 1988. He collaborates with several magazines as a cartoonist and creates illustrations for various bootleg covers. Work in the independent press (Decoder, Overtime) and since the eighties his work circulates through the worldwide network of mail art. As an engraver produces woodcuts and screen prints on paper and fabric. Well-established underground scene in the Italian and international recognition is also in cultural circles "official" through collaboration with numerous publishers (Shake, Mondadori, Derive and landings). Public comics, drawings and collages for Shake including the graphic novel based on the work of William Burroughs' "Naked Lunch" and carries many unique covers for Mondadori (including the novels of Nicholas Ammaniti). It also carries huge murals all over Italy, the last "The Sistine Chapel of the underground" in his studio. Since the early nineties focuses his energies on painting, exhibiting in numerous exhibitions in public and private spaces. Since 2003 he realized design projects in Milan also for international exhibitions, including at the Milan Triennale. He died prematurely in 2006, is celebrated as a cult figure of cyberpunk culture at the European Biennial of Contemporary Art "Manifesta 7", held in Bolzano in 2008.