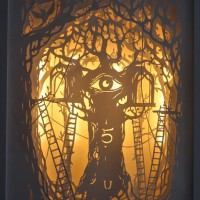 Matteo Capobianco , aka Ufocinque, was born in Novara in 1981. He has been an active protagonist in the Italian graffiti and after street art scene since 1994, with many interventions in abandoned spaces such as factories and farms .
After graduating in industrial design at the Politecnico of Milan, he began his artistic process of the fusion between art and design projects. This process opens a new door for Ufocinque and leads him to the theater and stage design, where he creates elements of scenery for the opera. His stage designs require a constant search for new technical solutions and materials that are among all the hand cut paper. His process of cutting and creating forms allows him to set up entire rooms and create different ambient with in them, making the shadow and light the co-protagonist of the (art)work.
Since 2007 he has completed numerous installations in the art scene as well as personal exhibitions in galleries and not to mention fashion shows, showrooms and events.
His main focus is the theme of "layer" which is used to make a variety of levels in which the interpretation of traditional painting techniques come together in the unity of the personal project. The " form" is never detached from the "function", but they support each other to create a dreamlike suspended world .