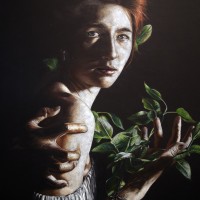 Neve starts painting by spraying the walls in the streets of Turin in 1995. Neve’s passion for art grows faster between the street and life: with dark circles around the eyes and paint stained fingers, he never misses the opportunity to leave his mark in order to paint and to search for his personal style and refine his techniques. Love for aesthetics and for classicism move him to combine urban art with academia thanks to the figurative art as a mean of expression. He paints in Italy, Spain, France, England, Greece, Switzerland and Germany, experimenting different types of artistic languages and techniques.
Driven by the leit motif that bursts into his drawings he directs his artistic interest in 2006 into realizing artistic performances and installations, many edited by Marco Scotini and Marcello Maloberti. In his works Neve insists on the value of his message for conversing with the observers and for leaving them an open question or at least a reflective mood. This is why in 2008 Neve produces urban works containing a strong social denunciation, like the silent protest of the Myanmar’s monk and the reversal of the roles of “Michelangelo’s Pietà”, which are showed at “Scala Mercalli”, curated by Gianluca Marziani in the Rome Auditorium. In the autumn of the same year he dedicates himself to a project of urban installations, disseminating Milan with fake bombs and cardboard weapons of war. This focuses the media attention on his work and is invited to a special program by TG1 and is also republished in many countrywide publications. The emotional impact of his work comes to the fore also in his bi-personal exhibition at the Milanese Magnorocca Gallery, which also exhibited him at the Mi Art 2008.
From graffiti to street art, from performances to classical academicism, Neve enhances its expressiveness with neomuralism. In his murals intervention with a hyper-realism of titanic dimensions come to life human subjects, suspended in a context sometimes fairy and sometimes real. In 2010 he participates to the Walls of Fame Project in Milan and during his career many Brands and Corporations, such as Campari, Fabiani, ENI Syndial. Numerous canvases where he marries the internal life with the world surrounding him in a delicate expression of figurative art; also numerous are the collective exhibitions and shows to whom he participates, to mention one, the 3rd edition of (con)Temporary Art in Milan in 2011 and the Düsseldorf Exhibition where his work was near the work of Giorgio Di Chirico and last but not least the Venice Biennale, in the Italian Pavilion curated by the art critic Vittorio Sgarbi.
In the last years Neve focuses his search for style in drawings and murals interventions, characterized for a black background where he paints only the “light”.
From 2012 to 2015 his paintings are showed in Europe: Strasbourg, Paris, Moscow and London, in the same space in which Andy Warhol exhibited. These works of a refined visionary hide in the plots an almost figurative enigmatic message that evokes the Archetypes of the human condition, with an attention for details and a sensitivity that deeply touches the observer.