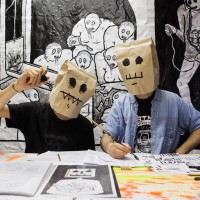 It all began for Guerilla Spam during a spontaneous action of pasting up posters and drawings on paper on the city walls of Florence in November 2010.
Since 2011 a number of their works can be seen on the streets throughout Italy and abroad. Their work focuses on the social and individual relationship of public spaces.
In 2012 Guerilla Spam created and published a book titled "Tutto ciò che sai è falso" ("Everything we know is wrong") which can be down loaded for free on line. For three consecutive years in a row Guerilla Spam are the artists behind the "Shit Art Fair" which takes place in Turin since 2013. The "Shit Art Fair" is an unauthorized exhibition of posters involving more than forty Italian artists each year. The "Shit Art Fair" is an alternative event to traditional art fairs.
"La Repubblica", "Corriere della Sera" and "The Economist" are some of the national and international newspapers recently to cover Guerilla Spam's actions.