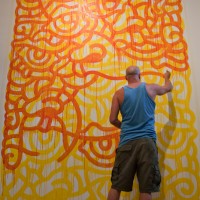 Ottograph who graduated from the Rietveld Academy in Amsterdam, started to paint at the young age of ten, he liked the idea of painting on the walls of the streets of Amsterdam and has never stopped doing so. Now Ottograph’s art can be seen in galleries, on walls around the world and not to mention a giant mural at the Modern Art Museum of Antwerpen, MoMu in Belgium, and 3 complete buildings in the centre of Moscow.

Ottograph’s work is full of color and life. What Ottograph paints is something that reflects society in general and is something that people can relate to.
On his own or together with his fellow artists/friends Ottograph has also set up several successful projects such as CIA (Central Illustration Agencey), as well as KMDG, a group of artist with a background in illustration, graffiti and street-art who bring together artists from around the world to paint walls and commissions together.
Over the years Ottograph has accumulated several important clients such as Nike, Mars, MercedesBenz, and Apple just to name a few…
The Galo Art Gallery is giving the carte blanche to the artist to do his thing and transform the Gallery in to his own world of pop and art and what ever else comes to the mastermind Ottograph to paint.